But "can you find a seemingly-dumb VC investment?" isn't an interesting question; the answer is obviously yes, and you can't do anything practical with that answer except drum up the public's knee-jerk resentment against Silicon Valley. I'm not interested in going that route.

If the answers to these questions are "no" and "yes" respectively, that doesn't mean all VCs are bad investors, just the typical VC. In fact, quite a few VCs argue that they're reliably beating the market by following a contrarian strategy.

If there's overinvestment in VC on the whole, or if there's a contrarian VC investment strategy that beats the market, that's good news -- it means there's an economic opportunity!

If not, that's a different kind of good news: the market is efficient and pretty much doing as well as a market can at allocating capital where it creates the most value. We can trust price signals to be something like quality signals.

There's upside whichever way the data shakes out, so we can go into this inquiry with open minds.

The VC Industry: How Big Is It?

VC is still a tiny fraction of investment capital as a whole, however. The VC industry's total assets under management are worth $524 billion; by comparison, mutual funds manage $17 trillion.

Most ordinary people don't invest in VC, but VC is popular with institutional investors like college endowments. For instance, 18 percent of Yale's endowment is invested in venture capital.

Why care about VC, if it's a small fraction of all investments? At the very least, it's a matter of professional interest if you work in VC-funded industries like software or biotech; also, to the extent that VC is involved in funding technological innovation, how well VC does at funding real technologies determines how abundant and productive our future economy will be.

How Good Are Aggregate returns on VC?

Does the VC industry as a whole have a good rate of return on investment compared to other types of asset?  Should institutional investors be investing less in VC, more, or about the same?

This question is mostly about the average performance of VC firms; it could both be true that most VC firms have poor returns but a few exceptional firms excel, so that if you picked  a VC firm at random its expected return would still be good.

Cambridge Associates' venture capital index estimates the returns on venture capital. It depends a lot on the time horizon: the 5-year rate of return is 13%, the 10-year is 14%, and the 30-year is 32%. But it's still clearly higher in long-run growth than the return on stock indexes like the S&P 500, which has a 5-year rate of return of 11%, 10-year rate of 16%, and 30-year rate of 10%. Investing in a random VC is higher-return in expectation, though also higher-variance, than just investing in an index fund.  In other words, investing in VC is not so stupid that you could do strictly better by just putting your money in a random stock instead. But that's a low bar.

A more subtle analysis takes account of risk as well as return. VC's may have higher average returns than the stock market, but they're also more volatile. Investors rationally see a tradeoff between risk (variance) and return (expected value) and are willing to tolerate higher risk only if it also brings higher returns; there's a mathematically optimal balance, defined by standard portfolio theory, defining how a investor with a given level of risk aversion would maximize long-run returns.

What's the risk-adjusted rate of return, comparing VC returns to the alternative of putting that same investment into an index fund? A 2015 study in the Journal of Finance says it's significantly negative, p=0.015; this means that rational portfolio investors should be investing less in VC. A 2010 study using more conservative assumptions finds a statistically insignificant level of excess returns (alpha = 0.17, p = 0.54), implying that investors are basically investing the right amount in VC; it's neither overrated nor underrated. I'm not sure how to evaluate which set of assumptions is more reasonable.

As of 2018, not a single Ivy League school endowment (which all include VC as part of their investment portfolios) had higher returns than a simple "60-40 portfolio" (60% stocks, 40%  bonds), which would have made a 15% yearly return; and the Ivy portfolios were also much higher risk! So Ivy League fund managers, at least, could do strictly better by investing in no VCs at all!

Is it stupid to invest money in VC at all? It's hard to say, given the conflicting results from the data. But we can at least say that institutional investors shouldn't be putting more of their money into VC.

Variation Within VC: Luck or Skill?

Some VC firms have much higher returns than others.  The Column Group, a biotech VC firm, posted a staggering 408% return in the first quarter of 2019; the same report claims a return of just 10% for the median VC.

Some observers are even more pessimistic about the median VC; Paul Graham, writing in 2009, said that in his experience the median VC loses money.   Israeli VC Gil Ben-Artzy claims that 95% of VC funds make less than 3x returns over a typically 10-year span, which amounts to about 11% per year -- worse than the S&P 500!

Most VCs, it seems, have terrible track records. Only one in every twenty is making more money than you could get by just investing in an index fund (and skip paying the VCs their high fees).

But that doesn't necessarily mean the Column Group is smarter than the median VC; they might have just gotten lucky. A lottery winner has a very large return on investment compared to the median lottery player, but not because she has higher skill.

If you want to ascertain if there's such a thing as investment skill, you need to look at investor track records. Do the same investors make above-average returns year after year? Then it might be skill (though it could also be something else, like monopoly power.)  But if investors show no consistency in returns, it definitely can't be skill.

The evidence is unequivocal: some VCs are much better than others, consistently, and VCs who are any good at all are a minority.

"Ok, VC as a whole doesn't have great returns relative to its risk, but some investors are much better than that! Why don't institutional investors just invest in good VC's and not bad ones?"

Well, maybe they can't; maybe identifying a VC firm with a good track record is hard. After all, fund performance data is private and jealously guarded, and every VC firm tries to only share numbers that make it look impressive.

How could we test this hypothesis? Well, there's a way to disprove it: if there were an easy-to-check criterion that accurately distinguished good investors from bad ones, then you'd be able to use that criterion to choose good investors who get above-market returns; which means that anyone not using this criterion is being financially stupid.

Well, here's such a criterion: investors with strong jawlines lose money. No, really. 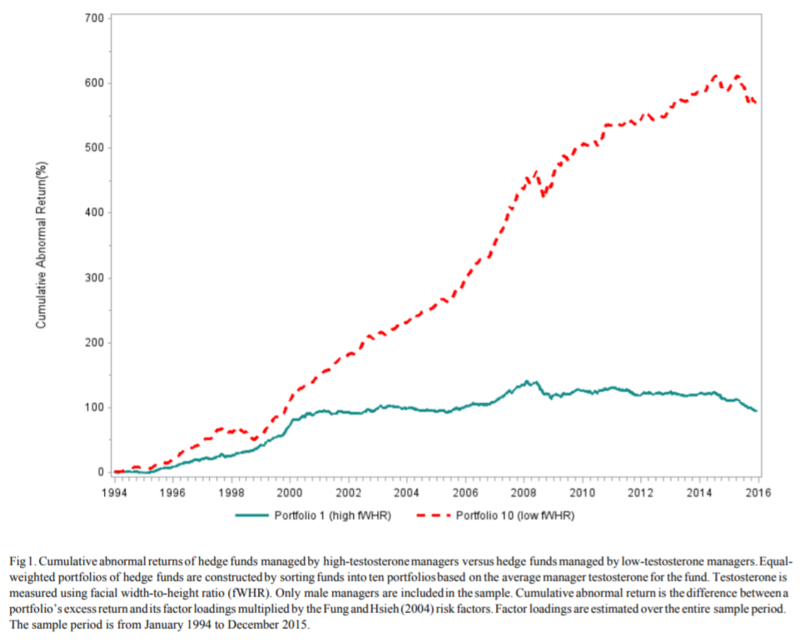 Investors with higher facial width-to-height ratios -- a predictor of high testosterone levels -- make over 5 percentage points less a year than their narrow-faced counterparts.
This is a huge effect, comparable to the difference between stocks and cash. If you invested only in funds run by low-testosterone investors, you'd be 6x as wealthy in 20 years.
(To be fair, these are hedge fund managers, not VCs; in this section I'll refer to evidence from a variety of investment types, but there seem to be commonalities).
What's going on here? Well, clearly, many rich people have a bias towards masculine, confident, charismatic men -- so much so, that they'll even invest money in crappy funds if they're run by guys with strong jawlines. Testosterone empirically causes people to make overly risky investments, which in turn correlates with worse performance.  A lot of investors are apparently letting bias get in the way of profit.
Additionally, hedge fund managers rated as more psychopathic earned about about 2 percentage points less a year than more empathetic managers  (p < 0.05).

In venture capital specifically, venture capitalists are much more likely to make successful investments if they have science or engineering degrees, have past VC or startup experience, and don't have MBA's.

Among innovation-intensive businesses, the percent of female executives correlates positively with firm performance; likewise, new businesses founded by men perform better than those founded by women, but this  difference is fully explained by male-founded businesses having more starting capital, being in more tightly clustered regions, and being more likely to focus on high-tech manufacturing.

What does this all mean? In short: low-testosterone, non-psychopathic, STEM-educated, conscientious people make better investment decisions than aggressive, impulsive risk-takers with MBA's; investors have a bias towards handsome, masculine men; and female founders can do as well as male founders if they enter the most technically innovative industries and get adequate starting capital.

"Just invest in the most macho, wildly confident guy you can find" is a common strategy, and one that fails. These recklessly overconfident, less conscientious individuals are more likely to take unwise risks, and also more likely to commit fraud -- both of which are bad for business in the long run.

(This hypothesis also matches the pattern of big recent failures in startup performance like WeWork and Uber).

You can beat the market as  an institutional investor just by not executing this stupid strategy. Therefore: we can be confident that a lot of capital is being invested stupidly, ie avoidably passing up opportunities for more money.

Do I have a problem with handsome, masculine men? Heck no; I married one!

I'm claiming that there is a lot of "dumb money" out there, which favors handsome, masculine men even when they lose money.

Gary Becker's theory about prejudice was that it ought to eventually die out.  racist employers who won't hire black people will eventually go out of business in a competitive market; any irrational prejudice in business owners or investors, should be selected against relative to optimal profit-maximizing behavior. If we see persistent prejudice that goes against financial self-interest, the market must be non-competitive.

Well, we see persistent prejudice in investment! In the most obvious way you'd expect: bias towards traits that make people high-status in our society. People spend money on people who look like winners; they don't check track records of actual winning. Why don't they all go broke and thus remove themselves from the market? I don't know, but they don't.

I do know, from the account of my friend Zvi who used to work on sports betting, that most people who bet on sports are not even remotely optimizing for making money; they're just sports fans who bet on the home team. You can make money just by always betting on the away team. There are just that many bets made by "dumb money", that you can "beat the market" without doing anything cleverer than betting against blind fandom.

Maybe something not too different is happening in business as well.

This is good empirical corroboration for the existence of a Stupid Coalition in business.  If people who have a preference for macho men disproportionately invest in companies and investment firms run by macho men, they can prop each other up temporarily, but sooner or later these whole clusters of highly correlated bias will experience market crashes.